ACTT has numerous ongoing projects geared to curating and compiling the history of the arts in TT.

The Guild of Masters 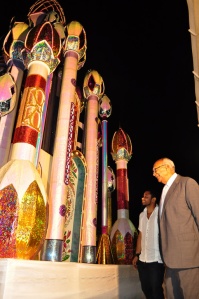 On Wednesday 7 November, the Artists Coalition of Trinidad and Tobago (ACTT) launched The Guild of Masters under the patronage of President Prof George Maxwell Richards with the unveiling of a 30-foot Cedros hosay tadjah at OWTU on Henry Street. The guild is an institution created to rescue disappearing traditional local skill in a period where we’re experiencing the death of our Golden Age generation.

We’ve lost more than 18,000 of 20,000 genius elders in the last 10 years. Because our political leadership hasn’t seen it fit to document, collect, curate, and transmit T&T’s legacy, dozens of traditions disappeared in the last decade.

ACTT estimates there are 144 traditions in danger of disappearing. These include skills like the engineering behind the best carnival King and Queen costumes pre-1985. There’re about four artisans who have that knowledge left. A casual glance at the quality of our current king and queens is evidence of the collapse — not only in imagination but artisan skill. This is a direct result from our nation’s refusal to institutionalise Legacy.

The 30-foot tadjah is the first artifact to be re-created. Our idea of the guild is: master elder artisans working with master apprentices re-creating masterworks whilst the entire process is recorded and codified.
Each part of that equation is important. It must be a ‘master artisan’- holder of local classical skill. It must be ‘master apprentices’ — practitioners already versed in the craft or parallel skills — beginners cannot absorb, replicate, or be trusted to sustain age-old practices. It must be ‘recreated masterpieces’ because these contain remarkable coded processes and subtleties. The nation also benefits by acquiring phenomenal artifacts for contemplation and for exploitation as heritage. The last part is critical: the entire process must be recorded and codified faithfully. ACTT now has in its possession a university course worth of information about the construction of Cedros-style 30-foot tadjahs.

ACTT won the guild in the first two People’s Partnership budgets. It wasn’t implemented. In that period numerous prospective Guild leaders — and their multi-million dollar projects- died: Geraldine Connor; JaJah Onilu; Sullivan Walker; Bertie Marshall; Aldwyn Chow Lin On; Ralph Mac Donald; Wayne Berkley; Geraldo Vierra; and others. The cost of not passing on skill will be massive. In five years this country will witness the collapse and disappearance of many pillars of our collective identity.

Inheritance: The Elders Lecture Series is held at City Hall, Port-of-Spain. Facilitated by the Ministry of Planning and the Economy, the event is to be staged on the last Wednesday of every month for the remainder of 2012 in tribute to the nation’s 50th anniversary of Independence. It will feature Trinidad and Tobago’s elder geniuses who will gather to talk about their careers and the traditions of our local art and culture. The proceedings will be recorded and become “a part of the communication process to the rest of the citizenry, so we will know how we evolved as a people.”

Indigenous — Mainstreaming The Local Under Ground

Indigenous — Mainstreaming The Local Under Ground is a 2-hour radio show designed for the specific purpose of showcasing Trinidadian musical brilliance heard every Thursday from 8pm to 10pm, on the Talk City 91.1FM station. Through “Indigenous” all artists seeking exposure, gain the opportunity to have the general public listen to their music. To be considered, they can drop off a selection of their best material at the temporary home of the ACTT, which is located at the Ministry of Social Development on Independence Square on the third floor. Alternatively, they can send their music to indigenoustt@gmail.com.

Artistes need not worry if their music does not fall under what is traditionally classified as Trini style. Trinibagonian music is “music made by a Trini”. Trini artists bring their own sensibility to their work, a discernment that is no doubt rooted in the Trinidadian life experience.

Inheritance: The History of Trinidad and Tobago Arts & Culture

This site uses Akismet to reduce spam. Learn how your comment data is processed.