← PSIP submission for the developmental spend for the Sector
Cultural Sector Development projects for Inclusion in the National Budget 2013/14 Under the Public Sector Investment Programme (PSIP): THE PRIORITY LISTING → 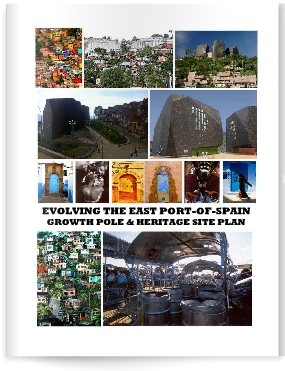 Every muscle of our society is straining. The murders are just the most graphic shudders indicating something is deeply wrong with the body of the Republic. Every right-minded citizen must engage in the repair. “Do not go gentle into that good night./ Rage, rage against the dying of the light…”

East Port of Spain is ground zero. Over the last decade over 1,000 black boys were killed by other black boys. Thousands of American, Israeli, and Russian-made guns entered the community along with hundreds of millions in drugs from Latin America. The community is collapsing dangerously. The murders are becoming more shocking, gruesome, and all-inclusive. And we’ve not hit bottom yet…I’ve written at length about the causes of gang-formation before: This is about solutions.

The tragedy is not just the hellish bloodletting—but the response of our leaders. When our political leaders speak about solutions it’s as if 150 years of human scholarship in sociology, psychology, cultural anthropology, and urban planning never happened. As if humans haven’t found reasons or solutions for urban collapse and youth violence in 200 years. What terrifies is the primary-school level solutions—more police, bigger guns, cable cars… It’s clear we cannot let politicians lead the actions for repair of East Port of Spain (EPOS).

From the 1990s our politicians in the last three regimes successfully replicated all of Jamaica’s urban gangster mis-steps of the 1970s—as if they were training for ‘Dancing with the Stars.’ Each political party funded warring petty criminals until they transformed them into multi-millionaire kingpins who then turned their communities into death-zones.

Last 15 years our politicians effectively took criminality from being a fringe activity in ghettoes and made it mainstream. Now most households are implicated because access to CEPEP, food cards, contracts, and jobs all funnel through gangsters. Before political interference most gang-boys had guns made in ‘Shop’ class. After million-dollar political patronage these boys bought brand-name guns by the container. In some communities every single boy above a certain age had a gun! Whilst gangsters were being elevated, legitimate community groups and activists—coaches, grandmas who ran schools, teachers—all were marginalised and impoverished. This skewed the value system of an entire generation of ghetto youth who saw that it paid to be bad.

Thankfully, there are drafted solutions—but are our politicians humble enough to accept ideas not authored by themselves? And will they include the authors in implementation? The East Port of Spain Council of Community Organisations (EPCCO) has worked brilliantly for 15 years on solutions for their own community. They consulted extensively and worked with groups like the Artists’ Coalition (ACTT), scholars like Dr Ralph Henry, and foreign agencies to draft comprehensive plans. ACTT and the Movement for Social Justice (MSJ) then got the East POS Growth Pole and Heritage City accepted in national budgets since 2010. There’s been zero implementation.

Mayor Louis Lee Sing successfully campaigned to get Port of Spain included in the Inter-American Development Bank (IDB) Sustainable Cities Initiative which has contributed hundreds of millions to implement. Suddenly certain people are parading themselves as ‘planners’ of these interventions. Projects are being implemented in secret and out of context. This is why they don’t work.

There have been many plans for the area. From both gangsters and patriots. Many have interests in EPOS. Their plans reflect their agendas. It’s rumoured that some want Laventille’s real estate and welcome murders because they carry down property value and lead to community migration… PM Manning’s plan included high-income residents moving in- and relocating current residents… These plans were dangerous and needed to be stopped.

EPCCO and ACTT’s plan for the EPOS Heritage City is an integrated, multi-dimensional plan with culture-based, architectural-based, police-based, education- and business-based, and social-programme-based solutions. It’s designed using “push and pull” factors that must be scheduled and deployed simultaneously. Law enforcement must provide the PUSH—progressive social programmes must provide the PULL… The choreography of how these programmes are deployed is crucial. The processes by which these programmes are created, staffed and sustained are as important as the results. The plan acknowledges the latest international studies on issues of urban collapse. It utilises solutions based on best practice urban interventions like: Geoffrey Canada’s ‘Harlem Educational Zone’; the rehabilitation of Medellin in Columbia by Mayor Sergio Fajardo; the El Sistema orchestra programme in Venezuela that has rescued over 400,000 children; and other models.

Any intervention in East Port of Spain must have EPCCO and their comprehensive plan as its centre. It must also include as equal partners: the MSJ; ACTT and the creative community; the ministries of National Security, Sports, and the Arts; the mayor of Port of Spain; MPs for the area; the Joint Consultative Council; Ivan Laughlin and urban planners; the National Trust; Pan Trinbago—with resident pansides like Tokyo, Renegades, Casablanca, Despers, All Stars, etc; the Office of Law Enforcement Policy; principals of all EPOS primary and secondary schools; the Downtown Owners and Merchants Association including the Chinese associations; the St Vincent de Paul group; all religious organisations operating in the area; social workers on the ground like Hal Greaves, Gregory Sloane-Seale, Fr Clyde Harvey, and others; and finally the progressive groups and residents of the area and interested citizens.

The power of East Port of Spain is so great that in renaissance or apocalypse it will carry the rest of the country with it… Of the seven national Mother Communities that birthed our Golden Age- it can arguably be called the Mother of Mothers. As crucible of Pan, Mas and Calypso—we owe her at least the best physicians and medicine available…

← PSIP submission for the developmental spend for the Sector
Cultural Sector Development projects for Inclusion in the National Budget 2013/14 Under the Public Sector Investment Programme (PSIP): THE PRIORITY LISTING →

This site uses Akismet to reduce spam. Learn how your comment data is processed.